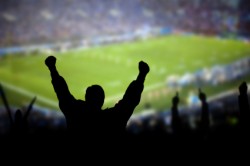 The National Association of the Deaf (NAD) and the law firm Brown, Goldstein & Levy, LLP filed this lawsuit in August 2006 on the behalf of deaf and hard of hearing Redskins fans Shane Feldman, Brian Kelly, and Paul Singleton who attend Redskins home games at FedExField.  The United States Court of Appeals’ ruling fully affirms the United States District Court’s ruling in September 2008 that the Redskins must provide auxiliary aids and services to make the game-day experience fully accessible to deaf and hard of hearing fans.

“This case is a tremendous victory for deaf and hard of hearing fans – not only Redskins fans, but all sports fans who want to fully enjoy the same game-day experience as their hearing counterparts,” said Bobbie Beth Scoggins, NAD President. “We expect sports stadiums around the country to take note of this groundbreaking decision.”

“The decision is a reaffirmation of the ADA’s goal of guaranteeing equal participation in all aspects of American life to individuals with disabilities,” said Joseph B. Espo, the partner at Brown, Goldstein & Levy who argued the case in the United States Court of Appeals. “This decision should prompt other professional and college sports venues to take the necessary steps to comply with the ADA.”

The National Association of the Deaf (NAD) was established in 1880 by deaf leaders who believed in the right of the American deaf community to use sign language, congregate on issues important to them, and represent its interests at the national level. These beliefs remain true to this day, with American Sign Language as a core value. As a nonprofit federation, the mission of the NAD is to preserve, protect, and promote the civil, human, and linguistic rights of deaf and hard of hearing individuals in the United States of America. The advocacy scope of the NAD is broad, covering the breadth of a lifetime and impacting future generations in the areas of early intervention, education, employment, health care, technology, telecommunications, youth leadership, and more. For more information, please visit https://www.nad.org.