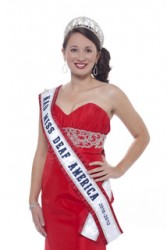 The National Association for the Deaf (NAD) and PepsiCo announce that the NAD Miss Deaf America, Rachel Mazique, will perform the National Anthem and America the Beautiful in American Sign Language (ASL) at the upcoming Super Bowl XLVI in Indianapolis on February 5, 2012. The NAD in partnership with PepsiCo worked closely with the National Football League to ensure that America’s songs would be delivered in ASL at the Super Bowl. The NAD hopes that the national broadcast will include the signed performance.

“The NAD thanks PepsiCo and the NFL for their support in ensuring that the elegance and allure of the National Anthem and America the Beautiful would once again be showcased through ASL,” said Bobbie Beth Scoggins, NAD President.

“Inclusion does not happen overnight, rather it is a journey of awareness,” said Massimo d’ Amore, President, Global Beverages, and executive sponsor of the EnAble inclusion initiative at PepsiCo. “That is why PepsiCo partners with such visible champions as National Association of the Deaf (NAD) to drive positive change. Our partnership with NAD began with ‘Bob’s House,’ the ASL ad we ran during the 2008 Super Bowl pre-game show, so it is only fitting that we are working together to once again use this amazing platform to shine a light on ASL and the issue of inclusion.”

The Super Bowl is one of the most sought after sporting events of the year and is watched by millions. The NAD is grateful to its partners for their support in promoting the artistry and linguistic importance of American Sign Language.