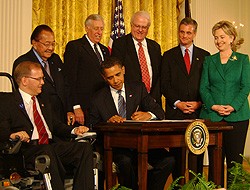 On July 29, 2009, President Barack Obama signed the United Nations Convention on the Rights of Persons with Disabilities (CRPD). At the present time, 153 countries have signed this international treaty recognizing the civil and human rights of people with disabilities. However, only 112 of these countries have taken the necessary step of ratification, which makes a country’s participation official in the treaty. On May 17, 2012, President Obama sent the treaty to the Senate and asked the Senators to ratify it.

The National Association of the Deaf (NAD) expresses thanks to the President for having signed the treaty three years ago and sending it to the Senate for ratification at this time. The United Nations developed and adopted the Convention on the Rights of Persons with Disabilities to advance equality further throughout the world. Persons with disabilities, including representatives of the World Federation of the Deaf (WFD) were extensively involved throughout this process. A “Convention” is an international treaty or an agreement. If a country ratifies this treaty, the country becomes obligated to implement rights spelled out in the treaty, such as protecting the human rights of individuals with disabilities. This Convention encompasses critical activities that create quality in living, encompassing employment, education, health care, transportation, legal and social justice, communication, and recreation.

This treaty is essential to promoting the civil, human, and linguistic rights of all deaf and hard of hearing people in the United States and throughout the world. The CRPD follows other UN Conventions in that it recognizes the importance of preserving and promoting the language and culture of minority people. The CRPD is unique in that it is the first Convention which includes deaf people as one such minority. Specifically, it recognizes the cultural and linguistic identity of deaf people who use sign language and acknowledges that teachers of deaf students should be trained and proficient in sign language. Further, the treaty specifies that deaf children have the right to be educated in environments that maximize both educational and social advancement.

For the United States to ratify the CRPD, the U.S. Senate has to approve the resolution for ratification by a two-thirds vote. After this process is completed, the U.S. government would be formally obligated to uphold the principles expressed in the CRPD and ensure that disability rights laws such as the Americans with Disabilities Act are appropriately enforced.

The NAD released a position paper on the CRPD. The NAD is working with other disability groups, particularly the United States International Council on Disabilities (USICD) to coordinate advocacy efforts aimed at convincing Senators to ratify the CRPD. Model letters to be sent to the Senators will be posted on the NAD website at the appropriate time, and the NAD needs everyone to assist in this effort.