Media is one of the most powerful tools to advance social change. Movies and television shows have been instrumental in transforming society. Every civil rights movement in the U.S. has been able to use the power of media to change perceptions and promote equality. However, to achieve equality, the narrative about any group must come from the group itself. The power of a story lays not only in how the story is told but also how it is portrayed.

Too often, hearing people misappropriate our stories and our roles, only to seek out our assistance to help them “pass” as deaf or hard of hearing individuals. This is not authenticity.

One listing highlights deaf and hard of hearing talent (#DeafTalent) and thank those who cast them in U.S. full-feature movies shown in theaters. This listing does not include documentaries, short films, internet-streamed videos, made for television movies, or television shows. The goal of these listings is to hold accountable actors who misappropriate roles of deaf characters, and the directors who choose those hearing actors instead of casting authentic deaf and hard of hearing actors.

The listings were created through research of various movie databases, primarily the Internet Movie Database (www.imdb.com), and is not comprehensive. Public feedback is welcome to help ensure that the listing contains every movie that has cast a deaf or hard of hearing actor. While casting of hearing people as deaf characters has occurred since movies began, our listing of misappropriated roles begins with the 1993 release of Calendar Girls, which was the first movie that the Deaf Community protested across the country at the time for misappropriation. 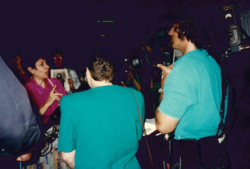 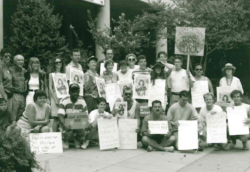 Left photo: Linda Bove talks to media about the protests against Calendar Girl in 1993. Right photo: Calendar Girl protest in 1993.

Every director and actor needs to realize the importance of authenticity by casting deaf and hard of hearing talent to portray stories of and about our community. Further, these listings serve as notice to all directors and actors that we will not allow misappropriation to continue unaddressed but will bring as much attention as possible to every such instance.