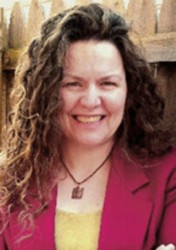 Carol Hirsch, a native New Yorker, has been in the news recently as the first ever deaf mayoral candidate for the city of Frederick in Maryland. She’s been living in Frederick for the past 15 years and recently submitted her mayoral application for candidacy.

Growing up in New York, she attended the Lexington School for the Deaf. She then went on to graduate from the National Technology Institute of the Deaf (NTID) in Rochester, New York.

Carol is very involved in the ASL community and often advocates for deaf and hard of hearing rights in Frederick. With her 15 years of living there, she decided to run for Mayor of Frederick to help build a bridge between the deaf/hard of hearing and hearing communities.

To our knowledge, there has been one elected deaf person in US history, Kevin Nolan, who was elected to the City Council for Northampton, Massachusetts. There have been other people who attempted runs for positions on city councils over the years, such as Kelby Brick in Greenbelt, Maryland in 1999 and 2001; David Pierce in Seguin, Texas in 2012; and Sonny Wasilowski in Faribault, Minnesota in 2012.

The NAD gives a monthly #NADHandwave to people in our community who better the world for everyone. If you know someone who you’d like to nominate for a #NADHandwave, you can submit your suggestion on www.nad.org/contactus! You can learn more about the #NADHandwave with this video.

The NAD was established in 1880 by deaf leaders who believed in the right of the American deaf community to use sign language, to congregate on issues important to them, and to have its interests represented at the national level. As a nonprofit federation, the mission of the NAD is to preserve, protect, and promote the civil, human, and linguistic rights of deaf and hard of hearing Americans. The advocacy scope of the NAD is broad, covering the breadth of a lifetime and impacting future generations in the areas of early intervention, education, employment, health care, technology, telecommunications, youth leadership, and more.

Carol, the NAD wishes you great luck as you continue your mayoral candidacy!