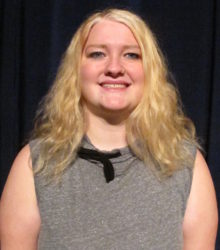 As our future leaders return to school for the new year, we are excited to recognize Jasi Kennedy, a student at the Texas School for the Deaf (TSD) in Austin, Texas! The National Association of the Deaf (NAD) recognizes her budding leadership including for her testimony before the Texas State Legislature regarding the importance of preserving the Texas School for the Deaf. This particular accomplishment came naturally to Jasi after watching her parents’ involvement in the community and legislative activism.

Jasi is the third generation in her family to attend TSD, and she is currently a senior.  Her high school years have been full of accomplishments!  During her freshman and sophomore years, she was the first deaf person to serve on the Downtown Austin District Youth Council along with eight other district representatives.  Additionally, as the president of the TSD chapter of the Junior NAD, Jasi represented TSD at the Jr. NAD conference in Washington, DC in 2013, and on a personal level she also attended the NAD Youth Leadership Camp in Oregon this past summer.

On campus, Jasi is involved in various activities, such as serving as a Student Body Government officer, performing on stage with DeafAct, and as the Prom chairperson last spring.  As part of her international studies, she also is involved in traveling, having been to India and Peru, and will be traveling to Cuba next year!  After graduation from TSD, she plans to attend Rochester Institute of Technology in Rochester, New York.

Jasi, the NAD wishes you good luck as you begin your senior year at TSD and looks forward to your leadership in the years to come!