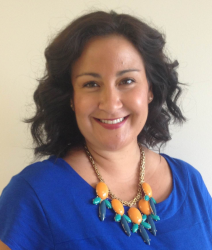 The National Association of the Deaf (NAD) introduces Melissa Yingst-Huber as this month’s #NADhandwave recipient! You may know her as a school counselor at the Phoenix Day School for the Deaf (PDSD), a news anchor for Deaf and Hearing Network, or even as the Vice-President of the Phoenix Deaf Women Organization. She embodies the NAD spirit in every ‘hat’ she’s got on.

Currently, Melissa is a school counselor at the Phoenix Day School for the Deaf (PDSD), where she works with deaf and hard of hearing children. Originally from Southern California, Melissa earned her bachelor’s degree in psychology at Gallaudet University in Washington, D.C. and recently became a Licensed Masters in Social Work (LMSW) after graduating with her master’s degree from Arizona State University.

Melissa previously served as the Vice-President for the Phoenix Deaf Women Organization but now lead as President. She also serves as the Program Development Officer for Deaf Women United. Her most recent accomplishment includes a National Academy of Television Arts and Sciences (NATAS) Student Production Award from the Rocky Mountain Emmy Awards as well as student recognition from the National Center on Disability and Journalism. She was also awarded the ADA Liberty Community Accessibility Pioneer Advocate Award from the Arizona Bridge to Independent Living (ABIL).

In her free time, Melissa enjoys cooking up a storm and hosting dinner parties, spending time with her husband Dave and their two furry long-haired chihuahuas – Kikko and Charlee, hiking, reading books and is a self-admitted reality TV show addict.

Melissa, thank you for your huge passion in your work on behalf of the deaf and hard of hearing community.

The National Association of the Deaf (NAD) gives monthly #NADHandwaves to people in our community. This is great opportunity for the NAD to recognize exemplary people who do the work they do. With such great people, the world continues to move. If you know someone who deserves a #NADHandwave, submit your suggestion online!