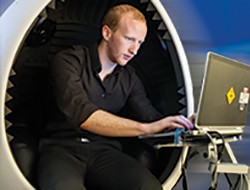 The National Association of the Deaf (NAD) wants you to meet Richard Spiecker from Rochester, New York, the recipient for this month’s #NADHandwave! The monthly #NADHandwave recognition program is an opportunity for everyone to meet an individual who has contributed greatly to the betterment of the deaf community.

Richard, currently a Senior at Gallaudet University in Washington D.C, is also doing an internship with the National Public Radio, NPR. His main task: to find deaf and hard of hearing volunteers in the Gulf Coast states (Alabama, Florida, Louisiana, Mississippi, and Texas) to help test a system NPR is working on, Nipper One. The Nipper One is intended to deliver emergency alerts to deaf and hard of hearing people living in the Gulf Coast states through local public radio stations and the Public Radio Satellite System (PRSS®).

Before securing an internship with NPR, he entered Gallaudet University after graduating from the Rochester School for the Deaf (RSD) in New York. In addition to playing sports at Gallaudet, he joined the Alpha Sigma Pi Fraternity, and eventually became its President. It was his advisor that encouraged him to consider an internship with NPR.

Thanks to Richard’s involvement, there are over 500 deaf and hard of hearing volunteers and 26 radio stations from the Gulf Coast states to participate in the alerting test(s). Through their feedback, NPR will learn if the Nipper One system should be utilized across the United States. Richard is also responsible in improving NPR’s Frequently Asked Questions webpage and naturally, he hopes to add American Sign Language videos to that page. Besides the projects Richard is assigned to, he enjoys teaching American Sign Language to his co-workers, bridging the communication and cultural gap at NPR.

He has many great qualities and enjoys any challenge he’s faced with. In addition to making the most out of his internship that has helped fine-tune his career path towards becoming a financial consultant, he is crazy about sports. He actually writes the sports column for his school newspaper, the Buff and Blue. He is also involved with interviews about sports related topics online.

The NAD is the nation’s premier civil rights organization of, by and for deaf and hard of hearing individuals in the United States of America. Established in 1880, the NAD was shaped by deaf leaders who believed in the right of the American deaf community to use sign language, to congregate on issues important to them, and to have its interests represented at the national level. These beliefs remain true to this day, with American Sign Language as a core value. The advocacy scope of the NAD is broad, covering a lifetime and impacting future generations in the areas of early intervention, education, employment, health care, technology, telecommunications, youth leadership, and more – improving the lives of millions of deaf and hard of hearing Americans. The NAD is a 501(c)(3) nonprofit organization supported by the generosity of individual and organizational donors, including corporations and foundations.

Richard, best of luck to you as you continue to discover what better ways to improve the deaf and hard of hearing community through technology!

Parts of this announcement were developed thanks to David Spiecker, Admissions Counselor at the National Technical Institute for the Deaf (NTID), and Gallaudet University.