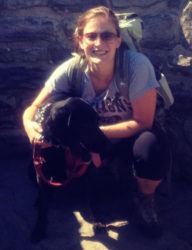 With 2016 underway, the National Association of the Deaf (NAD) is thrilled to recognize Lauren Searls this month. She recently won an important court case against Johns Hopkins Hospital (JHH) after they withdrew their job offer upon learning that ASL interpreters are needed as a reasonable accommodation.

Lauren is a deaf registered nurse (RN). Today, she works at the Strong Memorial Hospital in Rochester, New York. Prior to arriving at Strong Memorial Hospital, she studied at Johns Hopkins School of Nursing in Baltimore, Maryland and completed her education at Johns Hopkins Hospital (JHH). Eventually, she was offered a job with JHH but later JHH rescinded the offer after her request for ASL interpreters. JHH claimed it would be a direct threat to patient safety and cost. That didn’t stop Lauren – she filed a complaint of discrimination under the Americans with Disabilities Act (ADA).

Finally, on January 21, 2016, the United States District Court in Maryland ruled in favor of Lauren. The court found that Lauren has the right to accommodations, including an ASL interpreter, and that job duties are not altered or shifted to colleagues. Furthermore, the Court found that Lauren’s track record as a registered nurse in Rochester disproved JHH’s concerns that being deaf posed a direct threat to patient safety.

Lauren was born in Maryland and now lives in Rochester, New York. She graduated with a Bachelor’s Degree in biochemistry from Simmons College in Boston; got her Nursing Degree from Johns Hopkins University; and is now studying to become a Nurse Practitioner at the University of Rochester. She has a dog named Lola and a cat named Atlas, and both get along smashingly! Her hobbies include playing ice hockey and traveling the world, she’s been to India, China, the Philippines, Israel, Scotland, England, Egypt, and more!

The NAD thanks Lauren for helping to pave the way for future deaf and hard of hearing medical professionals.

The NAD gives monthly #NADhandwaves to people in our community. This is great opportunity for the NAD to recognize exemplary people for the work they do. With such great people, the world continues to progress. If you know someone who deserves a #NADHandwave, submit your suggestion online!