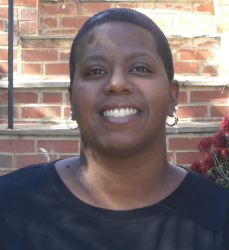 On this month of celebrating the 25th anniversary of the Americans with Disabilities Act, it is only fitting that the NAD recognizes L. Dara Baldwin as this month’s #NADhandwave recipient. Dara is well-known within the Washington, DC metropolitan area, as well as nationally, as a dedicated advocate for all civil rights including disability rights. While she has advocated on many issues including passage of the Violence Against Women Act of 2013 and has done so with her mastery of social media outreach, the NAD thanks Dara for her tenacious support on seeking accessible emergency televised announcements in ASL and captioning.

Any time there is a snowstorm alert, a tornado warning, or a “stay-indoors” advisory due to a shooting or possible terrorist attack; Dara is there with admonishments to government authorities for failing to have an ASL interpreter in clear view on television next to governors, mayors, and other government officials. She has repeatedly told DC government officials, including mayors, for years that there is no excuse for not making emergency announcements on television accessible given the large number of deaf and hard of hearing people living in the DC metro area. Dara has made use of her twitter account and blog to make such issues public as an ally.

Dara Baldwin was born in Torrejon, Spain, and acquired her desire to serve the community from her parents. She is currently the Public Policy Analyst for the National Disability Rights Network (NDRN), which is the nonprofit membership organization for the federally mandated Protection and Advocacy (P&A) systems and Client Assistance Programs (CAP). Collectively, the P&A/CAP network is the largest provider of legal advocacy services to people with disabilities in the United States. In her capacity, she is responsible for advocating on behalf of all people with disabilities on federal legislative issues. Prior to this current role, she was a policy analyst for the National Council on Independent Living (NCIL) and an ADA compliance specialist for the DC government.

The NAD thanks Dara for her staunch support of our civil, human and linguistic rights including the right to be safe during emergencies with full access to information that is shared with everyone else.