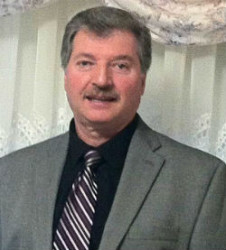 Deaf and hard of hearing people live throughout the world, and many of them come to the United States in search of education, employment, and/or a better life. Demir Bekiri, this month’s #NADhandwave recipient, is one of those remarkable deaf individuals who came into the United States and not only found everything he was looking for, but also devoted his life to sharing the American Dream with so many others who came after him.

Demir was born and raised in Grncari, Macedonia, which was part of the former Yugoslavia. When he was 20 years old, he came to the United States and settled in Chicago. He did not know ASL or English, but found the deaf community in Chicago and quickly learned both languages. He met and married his wife Demetra, and had two sons. He also found work and had everything he could want.

But he saw many other deaf immigrants struggling with adapting to American life and becoming citizens. In 2003, he worked with other leaders to create an organization dedicated to assisting deaf immigrants, primarily from Eastern Europe but welcoming those from other parts of the world as well – Deaf European American Association of Chicago (DEAAC).

Through this organization, he and other dedicated people created a school to train deaf and hard of hearing immigrants on English, ASL, American life, and passing the US citizenship exam. This program is called the Deaf Adults Education Access Program (DAEAP): http://www.deaac.org/#!blank/cxoj  Remarkably, this program has a 100% passing rate for every student to pass the citizenship examination!!

Demir is known in the Chicago area as having a huge heart, helping everyone in need, and never seeking recognition. Despite his humility, all deaf immigrants in the Chicago area know who he is and have elected him as President of DEAAC for nearly the entire existence of the organization.

The NAD recognizes his commitment and dedication to ensuring equal access for all deaf and hard of hearing immigrants, who deserve the same chance at life in the USA as all other immigrants.