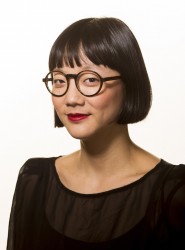 The National Association of the Deaf (NAD) is thrilled to recognize Christine Sun Kim and present the NAD’s first ever #NADHandwave! Some of you may know her as Miss National Asian Deaf Congress of 2000. She received her Bachelor’s Degree in Interdisciplinary Studies from the College of Applied Science and Technology at the Rochester Institute of Technology in 2002. She received her first Master Degree in Fine Arts (MFA) from the School of Visual Arts in 2006 where she dabbled with paper and painted and drew but felt her work wasn’t a true representation of who she was, until she discovered the opportunity to re-define sound – in her own way. She then went on to receive her second MFA in Sound/Music from Bard College in 2012.

Christine uses the medium of sound through technology to investigate and rationalize her relationship with sound and spoken languages. She saw sound as something that was not hers when growing up in California. While in Berlin for a one-month residency program, she started to play with the concept of sound and wondered what it meant to take ownership of it, as a deaf person.

Christine creatively uses technology to highlight what sound is, and leaves it up for anyone to define what it is. Her very first experiment with sound (out of many she has done), Christine “bought pigment powder in all kinds of different colours and had a friend say something loud enough to blow powder onto paper to produce a loose imprint of her voice.” Christine now works beyond vibrations because she believes sound is much more than that.

Her current work uses various sound equipment such as microphones, speakers, piano wires and iPads. She has exhibited and performed in worldwide venues and has been a recipient of numerous awards, including a recent TED fellowship, (http://blog.ted.com/2013/03/29/playing-with-sound-in-silence-fellows-friday-with-christine-sun-kim/). As a TED fellow, she is known for her “Sound Etiquette” presentation where she shares the unlearning of social cues and in turn the creation of her own sound etiquette.

#NADHandwave to Christine! The NAD looks forward to her many contributions to society with her work.