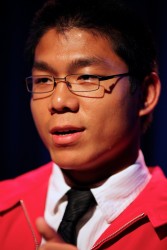 Setthawut Snow, a senior at Florida School for the Deaf and the Blind (FSDB) in St. Augustine, Florida, is known by his unique nickname, Setth. He was born in Thailand and adopted at age 5 by his parents, David and Tracie. The NAD recently had the pleasure of meeting him at the NAD Leadership Training Conference (NLTC) during October 3-5, 2013 in Omaha, Nebraska. While at NLTC, he served as a panelist during one of the keynote presentations and has publicly stated he plans to run for NAD President some day.

From early age, Setth has always loved doing service to others. He has experienced volunteerism in various capacities as part of his desire to contribute to the community. His most recent volunteer experience was working as a camp counselor for deaf middle school aged boys at Camp Endeavor in Dundee, Florida.

At FSDB, he is currently serving as the vice-president of the Jr. NAD chapter in which he had already served as the president during the previous school year. A lot of memories and friendships that he holds dear in his heart came from his participation in NAD’s Youth Leadership Camp (YLC) in the summer of 2012. He is very skilled in use of computer technology in the areas of custom layout design and promotional design management and was the editor-in-chief of the 2012-13 elementary school yearbook. He was also the vice-president for his class that year.

In addition to the awards and honors Setth has, he earned first place in the Prepared Speech Competition at the regional level and second place at the State level from his participation in SkillsUSA Florida. He also earned first place at the Poetry Out Loud (POL) event held at FSDB. Sportswise, Setth is an avid wrestler and has been the captain of his school’s wrestling team for the past five years – eventually, he was named the most outstanding wrestler at the National Deaf Prep Tournament. He was also on the Swim Team as their captain for three years. When not involved with school, sports and other activities, Setth loves being home.

After he graduates from FSDB, Setth hopes to serve a mission for the Church of Jesus Christ of Latter-Day Saints and to attend Gallaudet University to study elementary education.

The National Association of the Deaf (NAD) gives monthly #NADHandwaves to people in our community. This is a great opportunity for the NAD to recognize people who do the work they do. With such great people, the world continues to move. If you know someone who you’d like to nominate for a #NADHandwave, you can submit your suggestion on www.nad.org/contactus!

The NAD was established in 1880 by deaf leaders who believed in the right of the American deaf community to use sign language, to congregate on issues important to them, and to have its interests represented at the national level. As a nonprofit federation, the mission of the NAD is to preserve, protect, and promote the civil, human, and linguistic rights of deaf and hard of hearing Americans. The advocacy scope of the NAD is broad, covering the breadth of a lifetime and impacting future generations in the areas of early intervention, education, employment, health care, technology, telecommunications, youth leadership, and more.

Setth, may this year bring great windows of opportunities as you reach your High School graduation, we look forward to your NAD Presidency campaign! Congratulations on receiving this month’s #NADHandwave!