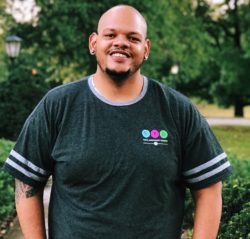 Domonic hails from Philadelphia, Pennsylvania, the City of Brotherly Love. He attended Pennsylvania School for the Deaf (PSD) until 2006 before transferring to the Model Secondary School for the Deaf (MSSD) in Washington, D.C. where he graduated in 2008. Domonic returned to Philadelphia to start his first career as a Resident Advisor (RA) to deaf individuals with disabilities. His leadership abilities were noticed soon after. He was promoted to Enhanced RA to support the deaf youth from the age of 13 to 21 for three and half years. In 2016, Domonic graduated from the Montgomery County Community College in Blue Bell, Pennsylvania with an associate degree in Social Science. Soon afterwards, the Pennsylvania Society of the Advancement of the Deaf (PSAD) appointed him as an Interim Coordinator of the Young Adult Program, where he organized workshops that provided information on resources available in the community to assist with deaf people’s daily lifestyle. In 2019, Domonic graduated from Rosemont College with a Bachelor of Science degree in Sociology and Political Science. Domonic is passionate in building his community with education, developing life skills, and expanding resources. His three children Alex, Aubree, and Zoe are his driving force to do his part in making a difference.